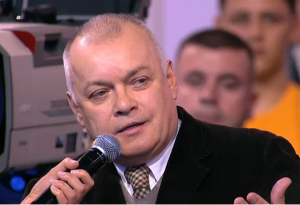 In 2014, the head of Russia’s biggest international news agency reminded the world that Russia is the only country capable of ‘turning the USA into radioactive dust’. Do Russian elites share similarly hostile attitudes towards Western countries?

Every Russian knows Dmitry Kiselyov’s face. Many technocrats in Brussels and Washington do so as well. In May 2014, the European Union included Kiselyov on their sanctions list published after the death of 298 people on board a Malaysia Airlines plane destroyed over eastern Ukraine. In 2013, Putin appointed the balding energetic man as the head of Rossiya Segodnya, Russia’s biggest international news agency and an important government mouthpiece.

Dmitry Kiselyov’s biography is in many ways symbolic and representative of post-Soviet history. In the 1990s, the then soft-spoken graduate in Scandinavian studies was, both in his journalism and his tastes, an exemplary European. He not only embraced everything Western, but promoted it and brought it to the country via ‘Window to Europe’, a TV programme aired on Russia’s first channel. He even took an English wife, a woman from Cambridge. They were married for six years.

Kiselyov’s rapid absorption of Western norms in the 1990s was followed by a fierce rejection of them. This was not only caused by the unpleasant personal experiences he had with Westerners, starting with his failed marriage, but also by the humiliation Kiselyov felt in relation to the West. His negative emotions for the West came in very handy when the Kremlin needed someone to forcefully beat their drums. Dmitry was more than up for the job. Russia’s ‘chief propagandist’, as The Economist called him, has become notorious for his ferocious anti-Western attitudes and homophobic statements, the latter including the demand that gays should be barred from donating sperm or blood and their hearts should be buried or burned rather than used for organ donation. On the day of the Crimea referendum in March 2014, he reminded the world that Russia is the only country capable of ‘turning the USA into radioactive dust’.

Throughout modern history, Russian attitudes to ‘the West’ have been characterised by ambivalence: an attraction and an eagerness to emulate, yet at the same time a suspicion, repulsion and dismissiveness. Russia’s history of thought has been formed in relative closeness to the West, yet has always tried to keep a distance. At the same time, the yardsticks used to measure progress, anything from technology to consumer goods, have nevertheless been predominantly Western throughout the twentieth- and twenty-first centuries. This has been immensely important for the history of Russian thought and Russian elites, whose discussions have revolved intensively around the question: to what extent is Russia intrinsically unique?

The art collector and financier Alexander Petrov considers Russia as ‘the centre of the conservative world’. This is because Russia combines Orthodoxy and Islam, and it is in agreement with the Pope with regards to conservative values. ‘We are strongly against LGBT’, he explains. Petrov, however, is not someone who is purely inward looking. This voluble man collaborates with many Western European countries to exhibit his Picasso and Dali collection, and he wants to strengthen his collaboration with Latin American countries. Nevertheless, his conclusion is decisive: ‘We don’t need the Western world as it is now. We want to preserve our civilisation as it used to be.’

The self-perception of uniqueness and superiority often go hand in hand. The telecommunication entrepreneur Yury Pripachkin sees one of Russia’s vital strengths as being the vibrancy of its businessmen, who are on average a generation younger as well as being self-made, more energetic and more hands-on than in the West. This group, he explains, is composed of ‘people who have done everything by themselves.’ A proof of Russia’s superiority is, for example, its achievement in developing capitalism within just a couple of decades, whereas the same development took the West over 200 years. Alluding to the bailout of banks in the UK, Pripachkin cheekily turns another Western argument on its head — that the mentality of Russian businessmen is stunted by the Soviet past, whereas that of Western businessmen is not. He says: ‘Many Western businessmen have a socialist mentality. They think the state must come and help them out of the mess.’ In his opinion, Russia’s younger and more innovative generation of self-made Russian businessmen will be more readily able to weather the ongoing economic storm.

Alongside Putin’s ascendancy and this rise in patriotism, the fame of dictator Josef Stalin has been revived. A poll conducted by Levada-Center in 2015 revealed that nearly half of all Russians think the sacrifices made under Stalin were justified by the Soviet Union’s rapid economic progress during his rule. Both of Dmitry Kiselyov’s grandfathers suffered repression in 1937/38, and one was eventually executed. One grandfather came under Stalin’s fire because he had been in business and the other because he had been high up in the Tsarist army. Kiselyov emphasised later that he had always been anti-Soviet. Nevertheless, despite the repression his family experienced, he considers the Stalin years as an exemplary period in Russian history. During the Stalin era Orthodox norms were respected:

Under Stalin there were much fewer problems than now. Drug addicts, homosexual marriages, etc. Yes, I consider them to be a social problem. From the outset they have never been welcomed by Orthodoxy. I regard them as a protestant-Lutheran compromise. It’s a weak retreat; it’s a deviation. In my opinion it contradicts nature. It’s a kind of mutation. In Orthodoxy, it’s a sin. In Europe, the notion of sin has to a large extent disappeared.

Those in the West who are optimistic about future relations, despite the above disconnect, often regard the Western education many Russians are going through as their salvation. Current young Russian émigrés are schooled and educated in Europe or the United States, and then go back to Russia with liberal, democratic values and ethics in their bags. This expectation is based on a strong belief in the supremacy and purity of Western thought. If this Western feeling of superiority is unsubtly flaunted — which it often is — it will inevitably prompt a defiant response. Many Russians have developed an attitude that dismisses Western democracy, human rights and the rule of law as hollow and hypocritical. In September 2011, Alexander Navalny, Russia’s most famous oppositionist and anti-corruption blogger, was invited to speak at the London School of Economics. He asked the chair in his opening address what on earth the London School of Economics does to turn Russian undergraduates into such fantastically corrupt individuals when they return to their homeland.

Hence, Western education, lifestyle and permanent residence don’t necessarily have a great influence on this view; on the contrary, they can rather cement it. The Western schooling Russians are presented with as gospel truth couldn’t deviate more from what they have heard from relatives, seen on Russian television and read in Russian textbooks. Patriotism — and with it nostalgia for Russia’s lost status as a superpower — is such a strong component of national identity that Western takes on history aren’t perceived as pluralistic views, but as a sharp knife stabbed into Russia’s heart. Those full of pride in their culture and history (and this is to some extent almost every Russian) will necessarily defiantly reject an unsubtle Western understanding of their country and society. Westerners should be more aware of this, if we are to better understand and get along with Russia.

UCL and Imperial College London Know It Wall, May 2016