The lives of wealthy people have long held an allure to many, but the lives of wealthy Russians pose a particular fascination. Having achieved their riches over the course of a single generation, the top 0.1 percent of Russian society have become known for ostentatious lifestyles and tastes. Nevertheless, I argue in this book that their story is far more complex than the caricatures suggest.
END_OF_DOCUMENT_TOKEN_TO_BE_REPLACED

This edited volume explores the complexity of choice in Russia and Ukraine. It seeks to understand how the new choices available to people after the collapse of the Soviet Union have interacted with and influenced gender identities and gender, and how choice has become one of the driving forces of class-formation in countries which were, in the Soviet era, supposedly classless.

END_OF_DOCUMENT_TOKEN_TO_BE_REPLACED 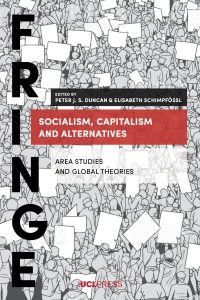 END_OF_DOCUMENT_TOKEN_TO_BE_REPLACED

In this book, we will tell the history of post-Soviet media and politics from perestroika to that of Putin’s post-Crimean Russia. It will be structured around the stories of Russia’s most prominent media managers and editors-in-chief and the outlets they either set up or ran for many years. Dissecting today’s media elites in Russia, we will scrutinise their entanglement with the Kremlin and assess their potential to play a significant role in re-democratising Russian politics.