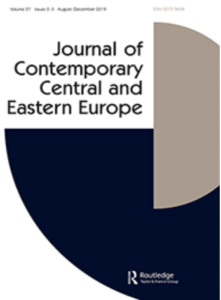 ““Rich Russians: from oligarchs to bourgeoisie”.” Journal of Contemporary Central and Eastern Europe

For her book, Elizabeth Schimpfössl conducted eighty interviews with members of the Russian upper class. One of the interviewees, an entrepreneur named Vladimir, mentioned that his childhood dream was to become Robin Hood. “This surprised me,” writes Schimpfössl. “‘Ah,’ I retorted, ‘that means you wanted to take money from the rich and give it to the poor?’ Vladimir stared at me and then started laughing out loud: ‘No, I wanted to go into the woods and shoot with a bow and arrow’” (69).

The book is full of such sardonic anecdotes. After expressing some obnoxiously conservative views on family and gender roles, another interviewee proudly announced that he was a “sexist”. Noticing the perplexed look on his interviewer’s face, the businessman added, dead serious, “A sexist is not someone who loves sex” (137). At a fancy Manhattan party, sipping champaigne, a Russian businessman’s wife suddenly told Schimpfössl that Stalin had achieved great things, but “did not go far enough” in terms of eliminating his rivals (166).

Beyond the anecdotes, Schimpfössl presents a sociological study of the “bourgeoisification” of the Russian upper class, that is, its consolidation into a class-conscious group that is able to project an ideological influence on society. Since the 1990s, Russian businessmen have abandoned the most egregious examples of conspicuous consumption, have developed an interest in philanthropy and the arts and have begun to pay attention to the “proper” upbringing of their children. All this, according to Schimpfössl, is part of the process of class formation. The end goal is to ensure the Russian bourgeoisie’s reproduction as a dominant social class.

Schimpfössl demonstrates that, in pursuit of respectability, the Russian upper class both aligned itself with the cultural practices of the global rich and rediscovered its roots in the Soviet intelligentsia, a social group that featured its own ideal of “kulturnost”, or culturedness. However, the desire to identify with the intelligentsia (and its values of ethical integrity) did not prevent the new rich from openly espousing cynical and opportunistic views. For example, one of Schimpfössl’s interviewees claimed that lying was a necessary part of his job, and he could do it every day as long as he believed that the human conscience is “quite flexible and resilient” (68).

Schimpfössl is successful in demonstrating that the Russian bourgeoisie has become much more class conscious since the 1990s: “Their shared social circles, housing spaces, highbrow cultural activities, and philanthropic commitments constitute the birth of a class they feel they belong to” (174). However, the book is quite contradictory regarding the issue of the ability of the ruling class to project ideological influence. On the one hand, Schimpfössl writes that “Russia’s new upper class has developed stable features similar to those Bourdieu called la classe dominante: that is, a social class that, besides economic power, also possesses cultural and social hegemony and the ability to develop transcendent ideas” (174). On the other hand, in the same concluding section she writes that the new rich “seek legitimacy above all from their peers and from the presidential administration, leaving the longer-term task of acquiring more widespread legitimacy to the next generation” (171). Contradictory statements regarding this key issue are scattered throughout the text. However, it seems that Schimpfössl ultimately leans towards the second position: despite its cultural transformation in recent years, the ruling class in Russia is still unable to achieve hegemony, and that is precisely why it continues to rely on the Bonapartist figure of Putin. Indeed, Schimpfössl is correct to raise the issue of “what the bourgeoisie will do in a post-Putin Russia, when they will no longer be able to use his legitimizing image to shore up their own position” (84). This is perhaps the most important question related to the Russian ruling class today.