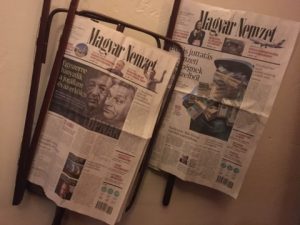 Our research findings provide critical insights into the relationship between media freedom and politics in Eastern Europe, with a focus on Hungary and Latvia. We have explored cultural, social and historical aspects influencing attitudes to authorities and professional ethics, alongside economic aspects including commercial pressures, online journalism and business influences.

Previous research has suggested that self-censorship is a response to state pressures and coercion – remnants of East European countries’ Communist pasts. Our findings, however, challenges this understanding. The data we collected indicates that journalistic freedom and autonomy today is just as severely affected by economic constraints, oligarchic tendencies and new authoritarianisms. Journalists know exactly what to report, what to omit and how to advance their careers. This is reminiscent of adekvatnost’, a distinct strategy among Russian journalists, who regard this skill as professionalism. It implies having a ‘feel for the game’ and the ‘right instinct’, which allows them to enjoy a certain level of freedom in their work and express their creativity. In our interviews with Latvian and Hungarian journalists and media managers we tested the extent to which adekvatnost’ might be a feature of journalism beyond Russia, in particular when a media system faces rising populism and oligarch-dominated ownership.

As such, the knowledge our findings might also have implications for the study of media and press freedom well beyond Eastern Europe. Economic troubles loom large over the media market in West European and, politically, their liberal democracies are increasingly challenged by populism. As a result, the study of censorship and self-censorship in (semi-) authoritarian countries with strong populist features (such as Hungary, Poland and Russia) and distinctive oligarchic dominance over the media market (such as Russia, Ukraine and Hungary) could provide insights into where journalism in many Western European countries, if not globally, may be heading.